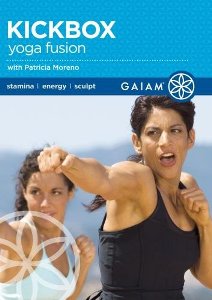 So many exercise DVD reviews center around how hard the workout is, as measured in ounces of sweat. I think that this approach, both in the DVDs and the reviews about them, exclude a whole segment of the population that they could and should be marketing to: the uncoordinated. For people like me, these DVDs can be measured in ounces of frustrated tears, rather than sweat (okay, in addition to sweat).

I can’t do anything about the DVDs themselves, but I can do something about the reviews. My goal is to write exercise DVD reviews for regular, uncoordinated people like me: the kind of people who can’t follow complicated dance steps, who aren’t bendy on a level with Gumby, who don’t really want to ‘feel the burn’ that comes from 90 minutes of intense cardio. These reviews are for people who want to have fun getting some exercise, without the shame of not being able to keep up with what everyone else is doing.

The germ of the idea for this blog came several years ago, during a particularly rough time at work. I was so stressed that I felt like kicking things all the time anyways, so kickboxing seemed like the natural solution to release some tension.

I dutifully went to the library and checked out a kickboxing DVD so I could try it out. The warm up was fine – a series of different punches, alternating left and right, then doing two on each side. I only got a little lost, but at the end of the warm-up I was still feeling pretty good.

I got confused in the first thirty seconds of the actual workout. The instructor would show a move “slowly” twice, then up to speed. I couldn’t even keep up at the slow pace. The workout nearly came to a premature end when I tripped over my own feet.

To add insult to injury, someone (I won’t name names, but he will hereafter be known as ICM – Irritatingly Coordinated Man), watched me struggle with the workout once, and then was able to do the entire routine from memory based on that one viewing. Argh!

I pouted for the rest of the weekend, and then decided that this was probably a fluke. That kickboxing DVD was clearly labelled as ‘for dummies’, and I’m no dummy, so it was obviously not the right choice for me.

Being a research librarian, I was well-equipped to search for a different kickboxing DVD. I eventually found an Amazon.com Listmania list (which has since been lost to the sands of time) that listed a bunch of exercise DVDs for people who weren’t that coordinated. Wherever you are, Amazon list maker, I thank you form the bottom of my heart!

One of the DVDs on the list was Kickbox Yoga Fusion. Cue heavenly choirs singing and sunbeams raining down upon us. The difference between the two DVDs was like night and day.

In each section, instructor Patricia Moreno introduces a move by doing it several times in slow motion, then speeding it up to tempo. Other reviews I’ve read have complained that this approach breaks up the flow and you don’t get enough of a workout, but those are obviously irritatingly-coordinated people who don’t need that level of instruction and can use the other gazillion kickboxing DVDs on the market. This one’s for us, the uncoordinated. A little bit of slowdown in the workout is preferable to getting so frustrated that you don’t do the workout at all.

Most of the moves were pretty easy to follow. Moreno does a great job of explaining what you need to be doing and how to check that you are doing it right, and there are several reminders throughout the practice, so she doesn’t just explain it once and hope you remember. She does all of this with a positive and patient attitude, which is key.

Moreno introduces the reverse turn with the statement: “You’ve got to be willing just to mess it up a couple of times first.” I messed it up more than a couple of times, and ultimately had to get ICM’s help before I got the hang of it. My technique is still pretty drunken-looking. It’s tough because an integral part of the reverse turn is turning around, at which point you can’t see the TV.

At the end of the workout, I’m wiped out, but I feel like I’ve really accomplished something, especially if I manage that reverse turn at least once.

The workouts on Kickbox Yoga Fusion were not without their faults. Like many workout videos, the cameraman tends to zoom in on the instructor’s face at times when the uncoordinated could really benefit from seeing what the instructor’s body is doing. Thankfully, Moreno is excellent at describing in detail what you should be doing with your torso and all your limbs at any given point, so it isn’t impossible to follow.

It took me quite a while to get up to speed with this DVD, but it wasn’t insurmountable, and I think it’s worth the effort. So, grab your own ICM (or ICW!), get in your ready stance, and start kickboxing!

Note: This exact workout DVD is also available under the name “Cardio Burn Kickbox”. GAIAM is famous for repackaging the same DVD under a different name, so you really need to do your research before buying a new GAIAM DVD. The Cardio Burn Kickbox DVD does say “Formerly released as Kickbox Yoga Fusion” in super tiny print on the back of the box, but if you’re buying online, you may not get a chance to see that first (which is how I ended up with both versions of the DVD).