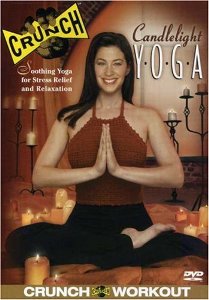 Yoga is not a competition.

This week’s review is Crunch’s Candlelight Yoga, led by instructor Sara Ivanhoe. On the surface, the DVD is pretty basic, with a 42-minute relaxing yoga workout and a 15-minute energizing yoga workout. There are no special features on the DVD.

This is clearly not power yoga. Even in the energizing workout, the movements are slow and the poses are held for a decent length of time. The focus is definitely on relaxation. There is a lot of emphasis on breathing. This is yoga at my speed.

Ivanhoe leads a group of seven exercisers, one of which is showing beginner modifications. As is typical with workout DVDs, the person who is showing the modifications is clearly Gumby in disguise, and is just holding back their natural bendiness for the DVD.

Most exercise DVD producers do not appear to have figured out that this is a bad idea. It turns out that it is difficult for us inflexible losers to follow someone who is only pretending to be not flexible. Also, it makes us feel like losers.

The great news is that in this DVD, there is a guy in the back row who is *actually* not flexible, and he is an excellent one to watch to see how inflexible people should do the poses.

When the group does seated forward bends, he does not bend very far. Like me, he certainly cannot reach his feet. When the group does eagle arms (where you intertwine your bent arms and have your palms meet at the top), his palms do not meet. I thought I was the only one whose palms couldn’t get any closer together than 6 inches.

I’m very thankful for this guy in the back, both because he lends legitimacy to my lack of flexibility, and because he shows me how I should be doing the poses. I ignore the Gumby-in-disguise woman doing the modifications and take my cues from this guy instead.

There are really two things that I feel set this DVD apart from the plethora of other yoga DVDs on the market. The first thing, of course, is Mr. Inflexible, the unsung hero we have already discussed.

The second thing is Sara Ivanhoe herself. Her voice is soothing, she mirrors the poses, and she does a good job of describing what’s coming next. Yoga can be hard to follow because of not being able to see the TV while in some of the poses, but she makes it clear with her verbal instructions what you need to do.

Throughout the two workouts, Ivanhoe explains yoga concepts without getting too New Age-y, which is nice. When describing the technique of ujjayi breathing, she avoids using intimidating and hard to spell words like “ujjayi”, and instead describes how you should sound like Darth Vader if you’re doing it right. She makes yoga accessible.

The best part about Ivanhoe, though, is her attitude about fitness. She says a number of times that “Yoga is not a competition”. She stresses that everyone has their own level of flexibility and works at their own pace; and that it is not important to do the poses perfectly, but to get the benefit of the breathing and the stretch for your body. Yours.

Her take on balance poses really sums up this attitude: she says that they are a great way to teach us a sense of humor, a nice euphemism for saying that they can be super tough to do. She recommends that if you fall over, you don’t worry about it, and just try again.

When I first learned yoga many years ago, it was a variant called viniyoga, which I always describe as “do what you can with the body you have” yoga. Ivanhoe really embraces this idea. It is great to be able to feel okay about the things that I can’t do in a workout.

I’ll leave you with an Ivanhoe quote from the introduction to this DVD, which really speaks to me: “We truly believe that beauty starts from the inside, out, and that learning to connect to the body that you have, right now, is the most attractive thing that you can possibly do.”