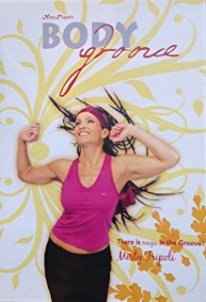 Get Your Groove Back

All of the workouts are done to live drum music and led by instructor Misty Tripoli.

Spirit Groove appears to be the main workout of the five in this set, so I tried it first. This may be a dance workout, but it’s like no other dance workout I’ve done before.

We started out with wiggling our wrists around in different ways … trying them out to see what movements they could make. Then we moved on to elbows, and worked our way through several other body parts.

At first I felt stupid and self-conscious doing these weird movements, but then something happened (perhaps I found my groove?), and I no longer cared how I looked. I was swept up in the dance, I was having a blast … this is joyful dancing at its best.

There were some specific dance moves shown, and a little bit of TIFTing (taking it from the top, stringing several previously-learned moves together). Overall, though, Tripoli encourages you to do your own thing. She mentions several times that there’s no wrong way to do it.

Partway through the workout, Tripoli instructed us to start moving in slow motion, as though we were swimming through molasses. I loved this. The molasses swimming was my favorite part out of all five workouts. Dancing in slow motion is clearly for me.

Later, we vogued, freezing in random positions in time to the drum beats. This was somehow also super fun. I couldn’t wait to see where I would end up at the next drum beat.

I feel like I can’t explain this workout adequately, but I love it. At the end of the 38-minute Spirit Groove workout, I felt uplifted, I felt energized. I had danced. Successfully.

The other workouts in the Body Groove set apply this philosophy (this spirit, if you will) to more structured exercise disciplines, with varying degrees of success.

The 27-minute Latin Groove workout brought the groove method to Latin dance. I struggled a lot more with this dance workout, as Latin dance choreography is more complicated than the free-form dance of the Spirit Groove workout.

Despite Tripoli’s detailed breakdown of the moves, and spending more time doing those moves in slow motion at the beginning than other dance workouts, I still got lost more than once. To put it in perspective, though, I did better on this one than any other Latin dance workouts I’ve attempted.

I’m not sure I’d do the Latin Groove workout that often, but the Bonus Ab Workout on the Latin Groove disc is another matter entirely. The 9-minute workout flew by, something that can rarely be said about ab workouts.

It starts with standing ab moves, which appear to be just dancing but really work the abs. Then we move to the floor for what you think will be more traditional ab moves, but even here, Tripoli incorporates the groove, adding interesting flowing variations to the standard crunches.

Since it’s hard to see the TV, you’ll want to watch the floor moves at least once before attempting them, but they are definitely doable once you see what’s involved.

The Yoga and Pilates workouts are very much in the same vein as the Abs workout – traditional exercises combined with groovy movements, making for a very flowing, relaxed workout. Again, there are many moves where you can’t see the TV, so previewing these workouts first is recommended.

The 32-minute Pilates Groove workout was a pleasant surprise. I did it fairly early on in the week, expecting to hate it, but this is the closest I’ve come to liking a Pilates workout yet.

The first 10 minutes of the workout was standing Pilates work that felt very groovy/dancy, and not like Pilates at all (a plus in my book). Then Tripoli transitions to the floor with some push-up style moves (not my favorite), and the rest of the workout is done lying down or seated on the floor.

The 40-minute Yoga Groove workout also spends more time in the push-up position than my arthritic elbow would like, but in general this is a fairly accessible yoga workout.

As with the Pilates workout, the groovification of the traditional yoga poses made for a very flowing, not-quite-yoga workout, but it was different and fun.

That’s really true of all the workouts in this set. They’re not traditional; they’re not quite what you were expecting; but they’re pretty darn fun.

Misty Tripoli’s Body Groove DVD set is great for those who need some joyful dancing in their lives. If you’re having a rough day or a rough year, pop this one in the DVD player; it’s guaranteed to lift your spirits and help you get your groove back.