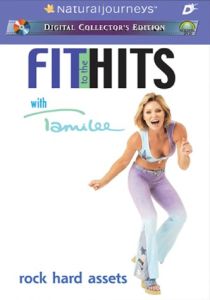 Between Rock and a Hard Place

I’ve been wanting to give another dance workout a try, and I’d been relatively pleased with Tamilee Webb’s instructional skills in previous videos I’d reviewed. I also really like the idea of workouts performed to actual music (albeit covers of the original songs) instead of the usual workout muzak, so Fit to the Hits seemed like it might be a good fit (or even a hit).

This is actually a two-DVD set: Rock Hard Assets features classic rock in its workout, and the Motown Moves workout naturally showcases Motown hits. Each workout clocks in at just over 30 minutes, and is split into six song segments.

I started with the Rock Hard Assets workout, as classic rock is more my jam.

During the warmup song (“Free Ride”), she introduced the kick-ball-change move, without a lot of explanation about what the “ball” or the “change” were, and after a whopping four slow kick-ball-change moves, we took it up to tempo. Needless to say, after four repetitions, I didn’t have the hang of it even in slow motion. I ended up just doing the kick and ignoring the mysterious ball-change part of the move.

It was probably a bad sign that I was getting confused about the moves during the warmup, and even more concerning when she announced we were picking up the pace at the beginning of song two (Sammy Hagar’s “Your Love is Driving Me Crazy”), but I soldiered on.

The first couple of moves on the second song were not too hard to follow, but it quickly degenerated from there. Sammy Hagar may have been driven crazy by love, but I was being driven crazy by the lack of specifics about what we were supposed to be doing. By the halfway point of the 30-minute workout, I was just marching briskly in place and enjoying the music.

Without the stress of attempting to follow instructions, I finally noticed that the exerciser in the ROCK t-shirt who seemed to be having such a fun time was none other than Misty Tripoli, of Body Groove fame. The comparisons with her dance workout were inevitable, and Rock Hard Assets did not compare favorably.

About the only place where Fit to the Hits came out on top was the soundtrack, as we danced (or not) our way through “China Grove,” Boston’s “Rock & Roll Band,” and Loverboy’s “The Kid is Hot Tonight.”

The workout wrapped up with a return to “Free Ride” and a return to every move we’d learned previously. Needless to say, I had not properly learned enough of them.

I thought perhaps I’d inadvertently started with the more advanced workout, and Motown Moves might be a little simpler, but that didn’t seem to be the case. When Webb kicked off the second song in that workout with mambo and cha cha steps – as though we all knew how to do those – I fondly remembered the very minimal instruction offered in Rock Hard Assets.

The Motown Moves workout was more of the same, with a different soundtrack – more moves that I struggled with in slow motion, and didn’t stand a chance of following once they were taken up to tempo. The main difference here is that the sixth song (“I Heard it Through the Grapevine”) was not a repeat, and the moves were not just repeats of what was done in the previous five songs. Naturally, it did include a lot of grapevines, a move with which I have a complicated history.

Throughout both workouts, Webb frequently starts singing along with the music. Some other reviewers were put off by that, but it didn’t bother me too much. I thought it showed that she was enjoying the workout, and it didn’t feel like she did it too often. I just wished the rest of the time was spent better explaining the moves.

I’d had high hopes for these dance workouts, since I’d enjoyed Tamilee Webb’s detailed instruction in her strength-training and stretching workouts. Perhaps it’s just the pace (strength training and stretching move a lot more slowly than dance), but the level of explanation I was hoping for was just not there.

The workouts are not without merit; I found myself spontaneously dancing around the living room humming “Your Love is Driving Me Crazy” later that same day. But trying to follow all of Webb’s moves will drive you crazier than Sammy Hagar. Ironically, I think the best approach for these workout DVDs is their option to play the workout with music only. Just crank up the volume and dance to your own beat.