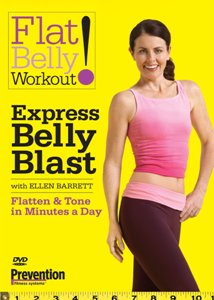 The design of this week’s DVD, Express Belly Blast, looks like a 90’s tampon commercial, but don’t let that put you off the workout.

Master of Disguise instructor Ellen Barrett is back, and this time she’s hiding ab exercises in a seemingly innocuous standing cardio workout.

This is brilliant in that you work your abs while remaining standing for the whole workout. So many ab exercises require you to lie on the floor being suffocated by your own bosom (my plump female readers will know just what I’m talking about). This was a refreshing change.

The cardio interval training is surprisingly simple to follow. You learn a move without the arm movements first (Level 1), then you try doing it with arm movements (Level 2), then you can optionally add jumps and hops to make it higher impact (Level 3). I did not jump or hop.

Once you’ve gone through this process with three different moves, you do the three moves in succession. In the next interval, you repeat the process, learning three new moves.

There’s not a whole lot of TIFTing (taking it from the top), so it’s nice that you’re not endlessly repeating the first move as you add on new moves. They come in discreet sets of three. Even I can remember three moves at a time.

The only part that was tough was at the end of the interval segment, where the instructor puts all the previous moves together. Barrett is pretty good at cuing the next move though, so it wasn’t too much of a problem that I couldn’t remember what was next. I just occasionally missed the first rep when we switched to the next move.

The strength training segment was kind of a miss for me. It felt like you were moving through the exercises far too quickly to really do them properly, sacrificing form for speed. I ended up slowing the pace down; I got fewer reps in, but it felt like they really counted.

In all the segments, one of the exercisers is showing modifications, and the strength training segment was the one where modifications were really needed.

The yoga segment was a great, if super-short, workout. It consisted mostly of variations on warrior poses, and some seated forward bends. You are able to face the TV for most of this workout, so it is easier to follow than many yoga workouts.

I really liked almost all the individual parts of the DVD (strength training segment notwithstanding, but I just cut that segment out, leaving me with a nice 30-minute workout). You really feel it in your ab muscles after doing the intervals, but you don’t feel suffocated while you’re doing them.

The big failing with this DVD, in my opinion, is that it’s very unclear how to use it. The menu has links to the individual segments, as well as a Play All link, implying that you do all of these segments back to back. Then there are these throwaway comments at the end of each main segment telling you how often to do that segment … and they’re not all supposed to be done with the same frequency.

At the end of the cardio interval segment, Barrett instructs us to do the cardio intervals three days a week, on non-consecutive days. She says that if we want to do more, we should follow the directions in the Flat Belly Diet book, which this workout is based on. This annoyed me; I have to go out and buy a book to know how to use this DVD that I just went out and bought? No thanks.

According to another throwaway comment at the end of the strength training segment, the strength training should also be done on three non-consecutive days. However, it’s not clear if you should do them on the same three non-consecutive days as the intervals, or if the two segments should be done on alternating days. The yoga segment should be done 7 days a week, according to Barrett’s comment at the end of that segment.

There are no instructions at all as far as the warmup and cooldown. It feels a little silly to warm up and cool down for a 6-minute yoga routine. The yoga routine almost feels like a cooldown; so are you supposed to do only one or the other? I don’t know, and I don’t want to have to buy a book to find out.

Once you figure out a schedule that works for you, however, this ab workout is a winner … period.