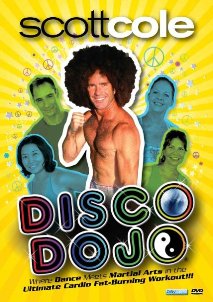 In a previously reviewed DVD (Tai Chi Balanced Workout), instructor Scott Cole was setting tai chi movements to a disco soundtrack, so you knew it was only a matter of time before he came out with this week’s review selection: Disco Dojo.

The intent with this workout seems to be bringing together tai chi not just with disco music, but also with disco dance moves. Initially I thought the focus was almost entirely on disco (albeit with tai-chi-inspired disco moves). However, there is one section with quite a lot of kicking and punching – something that’s probably not wise to do on a crowded dance floor.

The 45-minute main workout features a 6-minute warmup (which doesn’t waste any time, but gets right into the dancing), four different exercise segments of 8-9 minutes each, and a 5-minute cooldown.

The four exercise segments generally follow the same basic format. Learn a move, do some varying length sets of that move (e.g. a set of 8 on each side, then two sets of 4 on each side, then singles, etc.), then move on to learn the next dance move. At the end of the segment, you put all the moves together into a mini dance routine.

The mini routine tripped me up (literally!) a little bit, but it was certainly better than TIFTing (taking it from the top), where you do the first move so many times that you never want to see it again, and do the last move only a couple of times. Overall, I think Cole’s approach is better, as long as it is accompanied with enough instruction to help you remember what’s coming next.

One of Cole’s strengths is coming up with names for his workout moves that immediately remind you of what you’re supposed to be doing. I don’t understand what makes him so much more successful than other instructors at this, but I sure do appreciate it.

The first two segments were pretty easy to follow. The only places where I struggled were on a handful of exercises where you were combining radically different arm and leg movements … so I just left out or simplified either the arm or leg movements on those exercises.

As a bonus, there was some great ab work stealthily hiding in these two segments. I’m a big fan of standing ab exercises. Even though this workout feels like silly fun, you definitely get a workout.

The third segment moves from the ‘disco’ to the ‘dojo’ part of the Disco Dojo workout. Again, the basic moves were pretty easy, but I struggled when he strung together multiple arm and leg movements into a combo sequence.

The most difficult move in this segment for me was one where you shuffle to the side three times (or possibly four … and therein lies the problem. I couldn’t figure out how much shuffling to do), while doing a series of three jabs and a cross.

This whole “martial” segment seemed a little out of place in an otherwise dance-related workout. If I’m going to do martial arts, I’d rather do a workout that is focused on that.

The fourth segment revolved almost entirely around a move called a jazz square, which I never did master. I tried it at the initial slow speed, I foolishly tried doing it up to tempo … I even tried playing the slow speed move in even slower motion.

Nothing helped. I could not figure out where to place my feet, and was in perpetual danger of tangling my legs and falling to the floor in a sad heap. The constant return to the jazz square made the fourth segment nearly unusable for me.

In the tai chi-inspired cool down, classic Cole was back. I really enjoyed this very flowing cooldown, which could have been difficult to follow, but wasn’t (you probably will want to watch it through once though, so you know what to do when you can’t see the TV). As is typical of Cole workouts, the slowness of the movements make it surprisingly easy to keep up.

The special features, while thoroughly entertaining, were not especially helpful for the workout: a 9-minute segment showing the moves from the workout being used in a disco dancing situation, a 2-minute “after-party” outakes segment, and 90 seconds of “positive afro-mations”.

I would have liked to see a special feature that explained some of the more complicated moves in detail (yes, jazz square, I’m talking about you). Even better would be to have a little more description of the moves while you were doing them during the workout; it would have made a big difference.

Cole’s strength is not in his cuing or his ability to explain the moves (yes, jazz square, I’m still talking about you). Cole’s strength lies in his laid-back positive attitude and his confidence in your ability to do what works for you.

From the opening lines of the warmup where he welcomes you to get your disco groove on, to the end of the cooldown where he suggests everyone finish off by striking a pose, this DVD is totally Cole’s style. Infectious fun, relaxed attitude, and doesn’t take itself too seriously. He’s clearly having a great time, and you can’t help but feel the same.

With Cole quotes like “Just stylize it as you want to. You can see we all have very different styles. I want you to feel unique.” peppered throughout the workout, I felt like it was okay when my version of the moves didn’t turn out quite like his.

The DVD doesn’t really spell out how to use the different workout segments; do you do all four segments back-to-back, or pair the warmup and cooldown with just one segment at a time?

In the spirit of doing my own unique thing, my preference would be to make a workout out of the warmup, first two segments, and cooldown. This minimizes the choreography confusion and maximizes the silly disco fun.